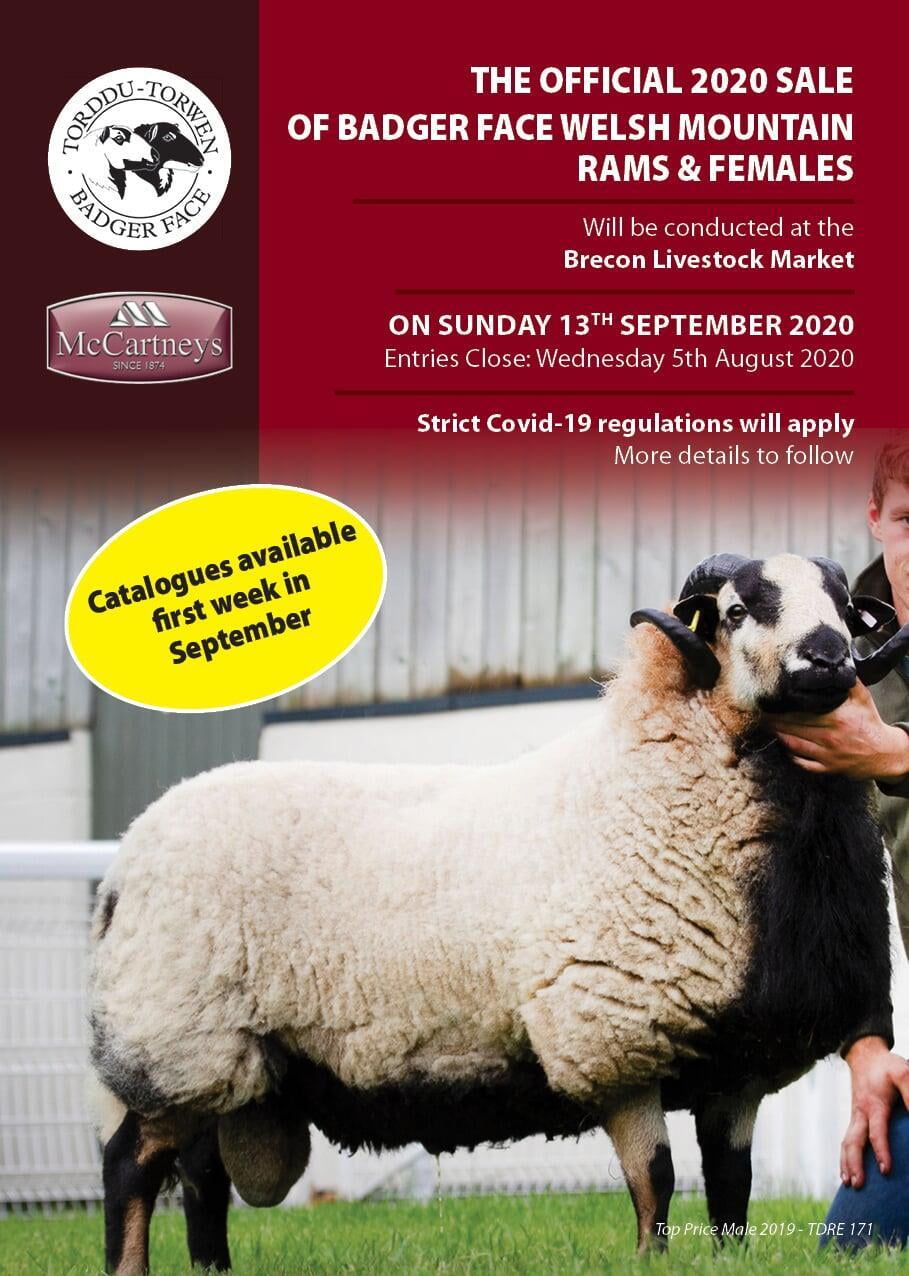 The online June competition opens 1st June and closes at midnight on the 10th of June. This month’s class is Aged Ewe.

- Chairman will nominate a judge for each month

- Judge will be announced after the closing date

- Not necessary for the animal to be held by handler

The Judges for the Aged Ewe Class are Cerys and Sara Brown.

They live and help on their farm in Nebo, Llanpumsaint, Carmarthenshire. Their interest started off at a very young age when they visited the Royal Welsh as a family one year and were generally cruising around the sheep aisles when they spotted the Torwen breed and kept on at their father to buy them an ewe each. When they were 8 and 9 years old, they started off with 6 ewe lambs purchased from the Jones Family Highview as Christmas present from their grandparents. Both are members of Cynwyl Elfed YFC and Aelwyd Hafodwenog. Cerys has just completed her GCSE and awaiting her predicted grades due to the COVID 19 and Sara has recently started her new career with Wynnstay in Carmarthen. During the summer months their main hobby is showing the selection of Badger face Welsh Mountain Flock in most shows around the county. Over the last 4 years they have had very many successful shows which include the Spring Fair, Royal Welsh and most local shows. They have received many rosettes in the young handler competitions.  Both have been incredibly lucky to have been selected as junior judges shadowing Mr Dafydd Williams and Mr. Hefin Thomas Bwlchclawdd at the NSA show and sales. This is one of their highlights to date. Sara has also been fortunate to win the Glyn Hawker Young Shepherd of the year award back in 2018. 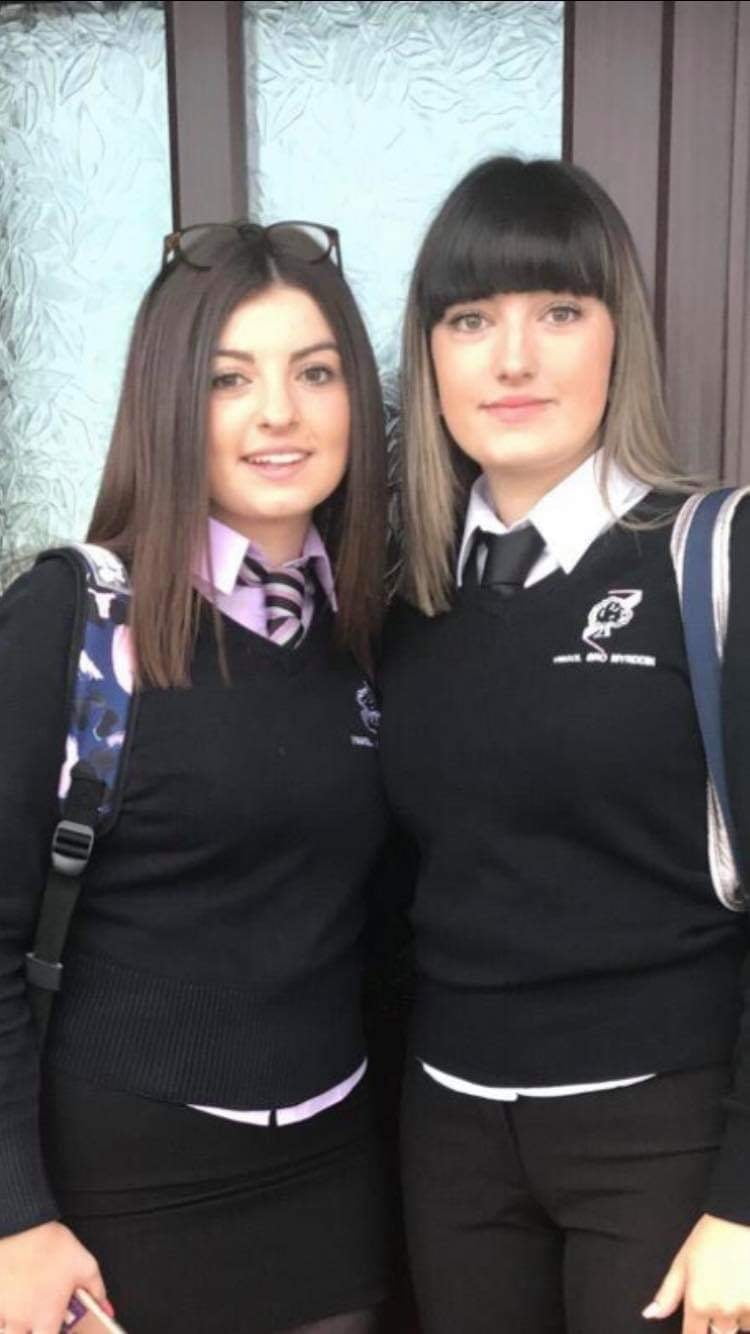 It is with deep regret that the NSA Wales & Border Ram Sale Committee has made the very tough decision to cancel the sales in 2020. The sales will not be going ahead this year, in the light of the ongoing Covid-19 pandemic and recent updates from both the UK & Welsh governments. Instead a free online register will be created to link NSA member vendors to potential buyers.  The decision was left for as long as possible, in the hope that the situation might improve by August.  However, with current social distancing regulations and restrictions on large events, the health, safety and well being of buyers and sellers and everyone involved in the sales is the main priority.  Full details of the online register will follow later this week but I wanted you to be aware of our decision as soon as possible.  Thank you for your ongoing support and we hope to be back in 2021, better than ever.

Ellie Layton is the judge for the online ram class

My name is Ellie Layton and I’m 19. I have grown up on a mixed beef, sheep & arable farm in Herefordshire working at the British Limousin Cattle Society. Interest sparked spending summers watching my mum showing from the ringside in the pram. My first judging duty was in 2012 at Eglwysbach show. The Llwyn On flock consists of just over 100 Badger Faced ewes, mainly torddu, which we put 60% to a Suffolk tup to breed lambs to suit a more commercial market. The best marked ewes are then put to a badger tup to breed replacements and hope some are good enough for the show season.

During the coming months you are invited to compete in our very own first online show!  We will post the competition on the 1st of every month, starting in May. Closing date is 10th of every month. You can enter by posting a picture on the Facebook group, by e-mail or send a printed photo to the secretary.
Rules:
Chairman will nominate a judge for each month
Judge will be announced after the closing date
Entries must consist of this years’ stock only (no previous show pictures to be used)

Not necessary for the animal to be held by handler

May – Ram any age

You are all aware of the current national situation regarding Covid-19. The Society has no option but to cancel the committee meeting that was scheduled for 19 April and the Spring meeting on 3 May.

A number of members who regularly participate in local and national shows will know that several societies have either postponed or cancelled this years shows. Our advice is that members should check with individual shows in order to get the most up to date information.

The next society newsletter is still planned for the end of March and the Society Flockbook at the beginning of May. However, I must stress, that I can give no assurance of an accurate date, due to the ever changing daily situation that may affect Society officers and/or the printers the Society uses. I appreciate that not all members are on Facebook, so can I please ask you to share this message with fellow members who are not on-line. There will also be an update in the newsletter.

Farming is well known for being an industry that can be lonely at the best of times, and this current situation that we all find ourselves in is worrying for us all due to many different reasons. Don’t be afraid to ask for help and if anyone needs a chat don’t hesitate to pick up the phone to myself, any of the officers or committee members.

The country finds itself in an unprecedented situation and therefore it is imperative that we all follow Government and medical advice. Now is the time for us all to pull together, support each other and be kind.

Please note that some of these are cancelled due to Covid-19.  An updated list will be provided once future dates are known.

You can download the Society show points form here

The 2019 Royal Welsh Show saw the Society’s patron attend the show on the Monday. HRH Prince Charles met with the Society Chair and Vice-Chaired and also presented awards to the two champions.

HRH Princess Anne attended the 2018 NSA Ram Sale. The Society was privileged to be one of the breeds visited. She spoke to the two champions and was presented with a gift from the Society.

The Society wishes to thank the Joseph Family for hosting the Society Open Day on Sunday 15 September 2019. Nearly 150 people came to Llyswen to see the famous Lloyney Badger face sheep along with their other breeds of sheep the Brecknock Hill Cheviots and the Texels. The weather was extremely kind throughout the day and enabled everyone to relax and enjoy the sheep and all the other activities during the day.

Thank you to everyone that helped and contributed to the day. 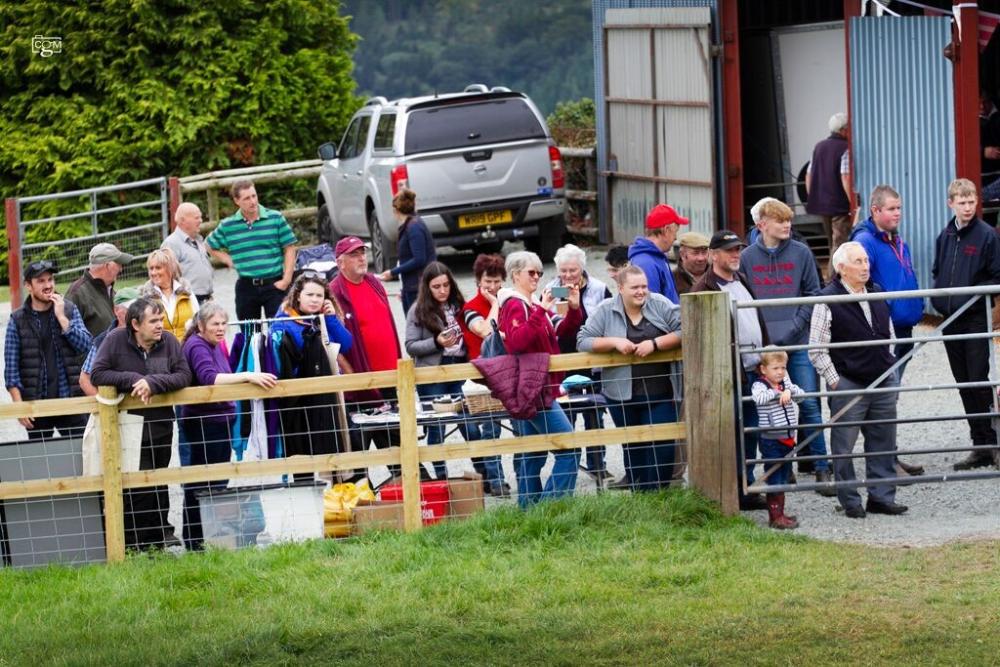 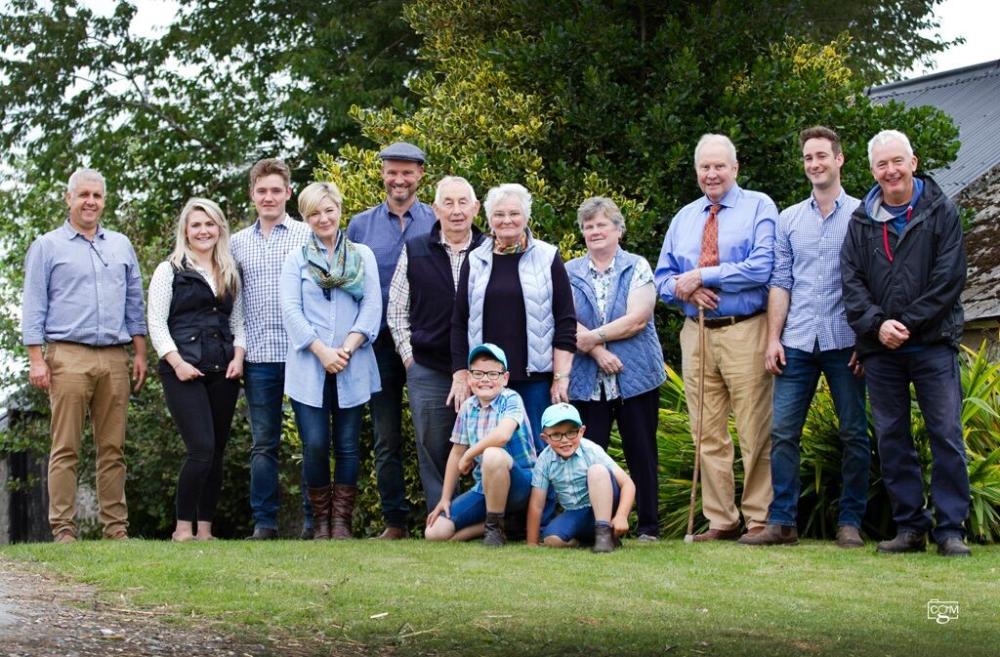 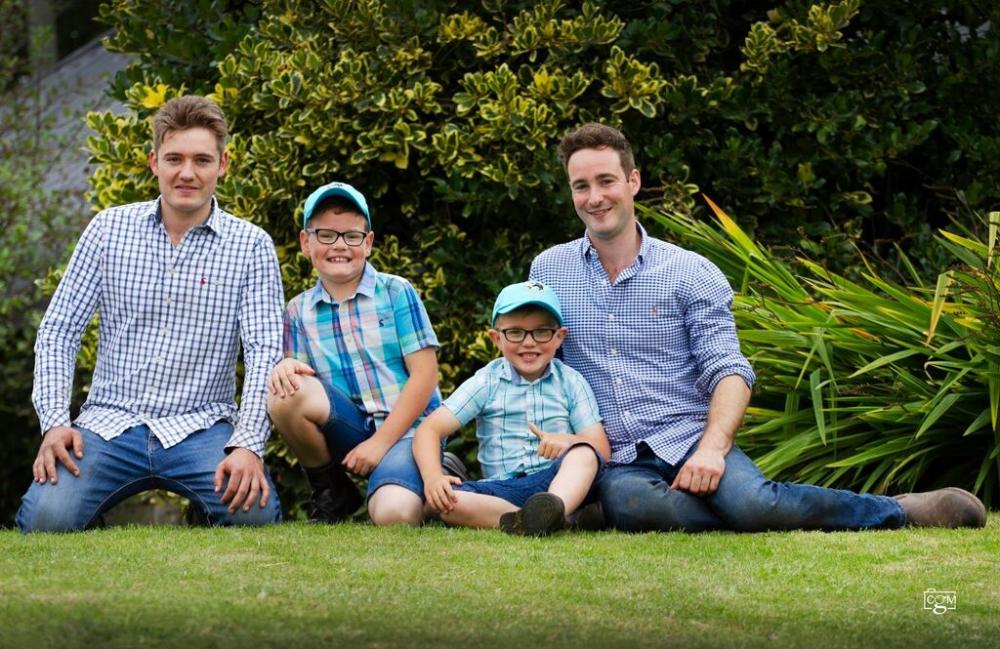 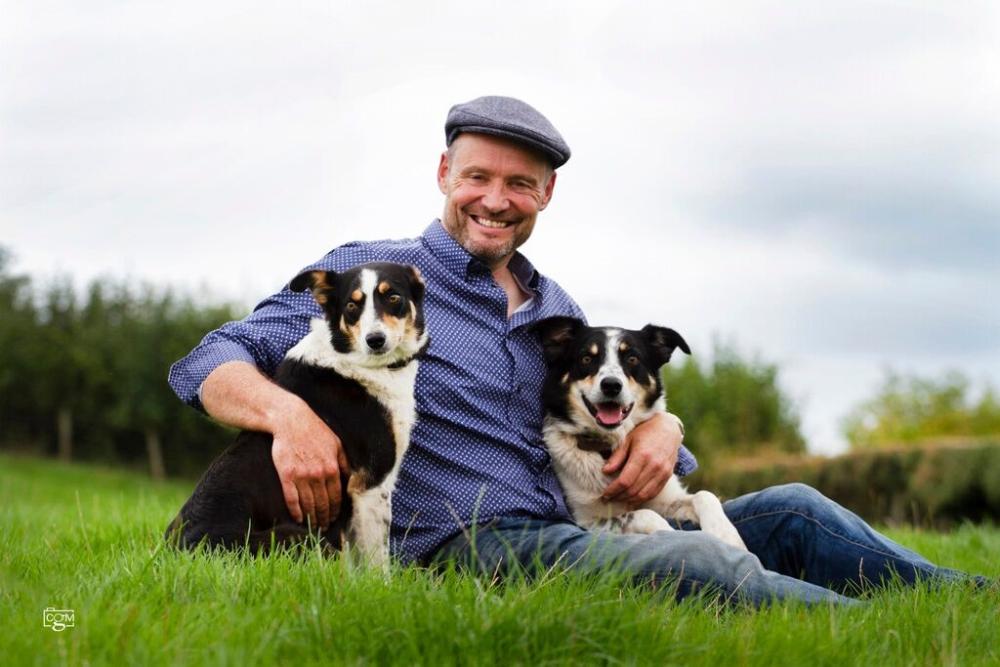 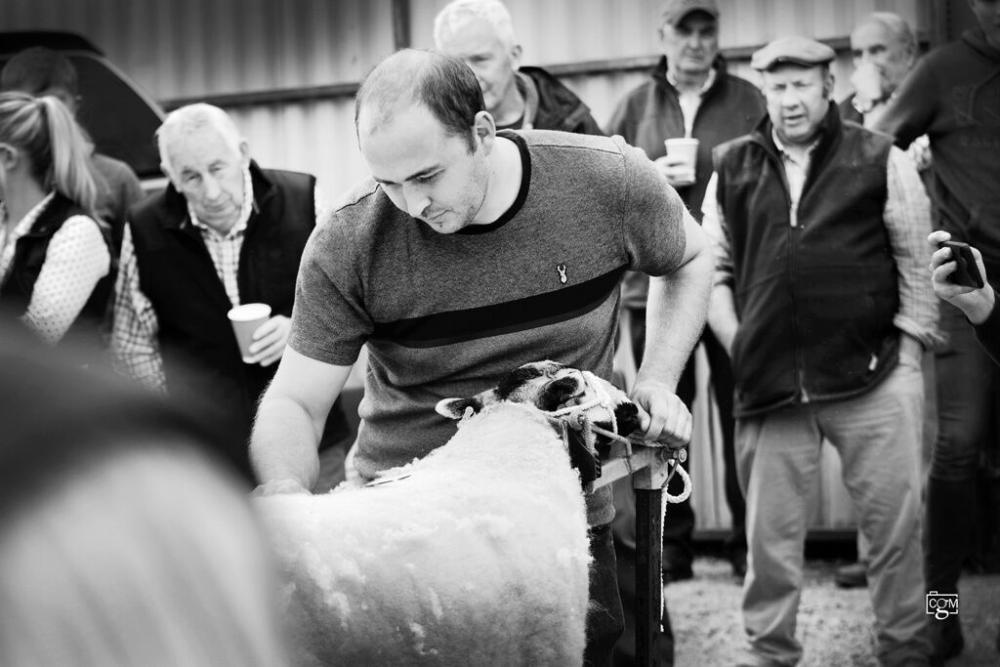 The Badger Face sheep stand set up at the NSA sheep event in Malvern. 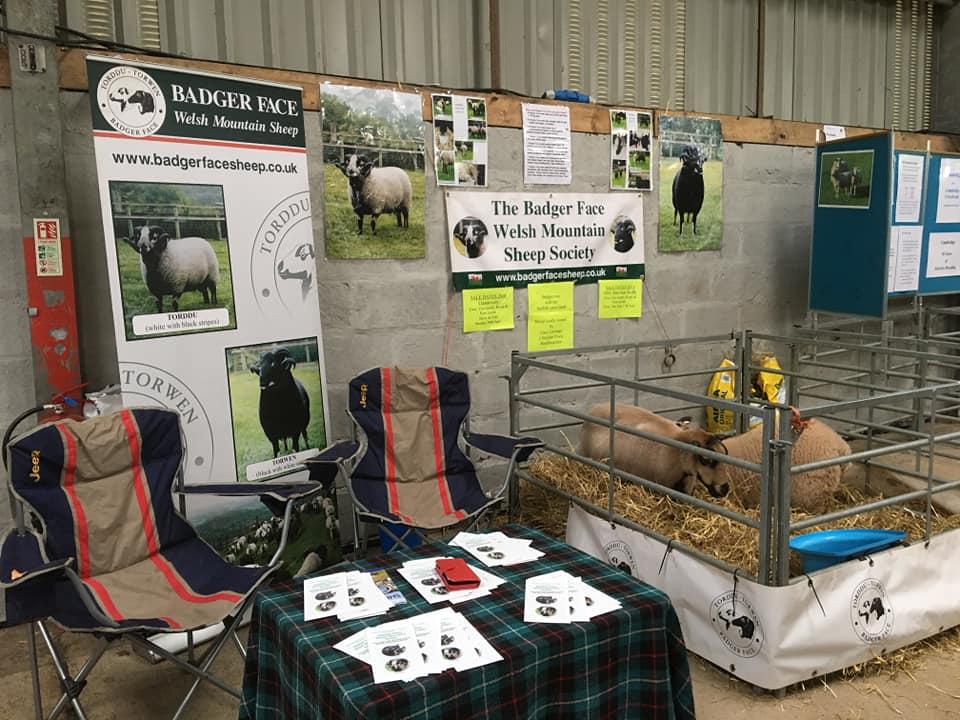 Updating member details
The society form for updating members details and current records of registered sheep kept can be downloaded here. Please complete and email to the secretary secretary@badgerfacesheep.co.uk

Join the Society to participate in the shows and sales, register ewes and rams, and share your interest and enthusiasm for this fascinating breed with over 300 like-minded members. It costs just £15 to join the society or £5 for under-16s. Complete the online form or download it here.

Annual subscriptions are then £20 per year or £15 if paid by standing order.